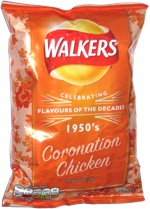 We crunched in to find a light crunch and a tasty chicken flavor with fairly minimal spices beyond the chicken, a taste not all that different from the non-special-edition Roast Chicken flavor from Walkers, but it did have a hint of Indian food spices. Tasty and good.

From the package: “In 1953, one coronation wasn't enough for our nation. So Coronation Chicken was created, the most iconic flavor of the 1950s.” ... “Since Leicester Butcher Henry Walker first began making crisps in 1948, we have always creating flavours that reflect the tastes of the nation.”

This snack was discovered by Judy and Lee in Scotland. Review published June 2018.