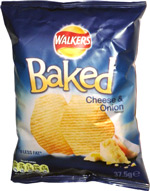 Taste test: This version of Walkers crisps was similar to Baked Ruffles, with a similar near-hexagonal shape, look and texture.

The major difference was that these crisps were bigger than Baked Ruffles, as one crisp was definitely more than one bite in this case, vs. one good sized bite for Baked Ruffles. Both kinds had were fairly flat with a very subtle rippling. The other major thing here was that these had a distinctly British flavor in Cheese & Onion. They also had quite a nice crunch without seeming too fake, so these were some of the better baked crisps we've tried.

From the package: “70% less fat” ... “Hey — congratulations! Not only because you've grabbed yourself a bag of the nation's favourite flavour but because you've grabbed a bag of Walkers Baked. Our dedication to tickling your taste buds means we've seasoned these beauties with real food ingredients. Being from our Walkers Baked range means they've been oven baked, twice, for crispy crunchiness and exceptional taste plus they contain 70% less fat then ordinary Walkers crisps.”