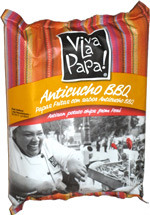 Taste test: These potato chips were smallish and thick cut, with kind of a dull orange color, a midlevel helping of seasoning powder and lots of skin around their edges.

They had a nice crunch to start, and that led into a very tasty flavor apparently based on the peruvian anticucho dish. The bag said BBQ, so those who read it expected a more conventional barbecue flavor, but we got something else entirely that most people liked a lot. There were some chili peppers in there, plus oregano and other very tasty spices. It wasn't very hot, just slightly so, and the flavor wasn't intense, but it was quite tasty. There was a very mild heat in the aftertaste. Our tasters were quite impressed.

Smell test: Nice spices, and nothing like any other barbecue chips we've tried.

From the package: “Artisan potato chips from Perú” ... “Anticucho is a classic Peruvian dish, often eaten at a roadside 'anticucheria' or at the most traditional parties and celebrations. Smoky, with a hint of chili, paprika and oregano, simple delicious.” ... “¿Que viva la papa!/Long live the Potato!” ... “Suitable for vegetarians”