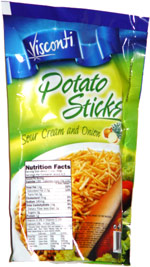 The sticks had a good crispness and a very creamy and tasty sour cream and onion flavor. There were some green specks, possibly parsley, on most of the pieces. The taste was very good, but the sticks were so tiny that it made them difficult to eat. Grabbing them with the fingers one at a time was cumbersome, so the best bet with these is probably to pour a bunch into the palm of your hand and pop them into the mouth all at once.

From the package: “Seasoned fried potato sticks” ... “Deliciously crunchy!” ... “Made in Brazil”