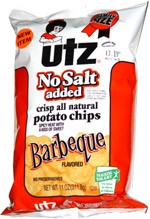 Taste test: This item was a first for our tasters, as Utz decided to try making a no-salt potato chip with a flavor seasoning.

We've tried a number of plain no-salt potato chips, and the result is usually a very weak flavor. The chips were crisp and generally large, and they had a bright orange flavor powder, unevenly applied. The no-salt barbecue formula gave these a weird taste, as most of our tasters really thrown off by it when they first crunched in. The lack of salt really seemed strange when combined with a sweet barbecue flavor. Some people tried seconds and eventually warmed a bit to the flavor, but given the initial reactions, this one might take some getting used to. After eating several chips, there was a hot aftertaste.

Smell test: Very mild spices, not all that barbecue-like.

From the package: “In recent years, sodium has become a health concern for many consumers. Long before that, Bill and Sallie Utz believed that if a basic potato chip had a good flavor, a little salt would enhance the flavor while a lot of salt would destroy it. ... Now we are pleased to be making a seasoned No Salt added potato chip .... Barbeque Potato Chips. We believe the chips in this bag are the best tasting seasoned, unsalted potato chips on the market today.” 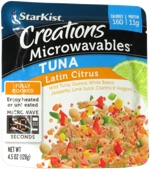