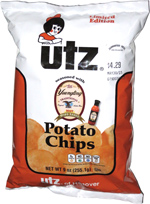 Taste test: When I spotted the Yuengling name on this bag of Utz potato chips, I decided immediately that I must buy it, but truthfully, I thought it was referring to the beer and not a hot sauce made by the same company. In fact, I didn't even know that Yuengling makes hot sauce, but based on a thorough reading of the bag, apparently they do, and the recipe involves their beer.

I opened the bag to find that it contained many large chips with generally a light yellow color and an orange glow in some areas, with some skin on the edges. I crunched into find the chips were cut thin and had a nice crispness, with a creamy flavor initially, followed soon after by a nice hot sauce zing and hot aftertaste. It wasn't killer-hot, but it was reasonably hot. The taste was quite good, and it was quite unlike other hot sauce chips we've tried, but when we shared these around at a party, nobody who tried some could taste anything resembling beer. People did like the taste a lot, as the large bag got emptied fairly quickly.

Smell test: Nice fresh potato smell, with cheese or something like it. Didn't smell like hot wings or beer.

From the package: “Limited Edition” ... “Utz has partnered with the manufacturers of the Yuengling line of sauces to offer a Limited Edition Potato Chip seasoned with Yuengling Hot Wing Sauce and made with Yuengling beer straight from America's oldest Brewery! The blast of heat provided by the wing sauce seasoning is complemented by our crisp, classic Utz potato chips.”

This snack was discovered by Jeremy at Tropical Foods, Boston. Review published .