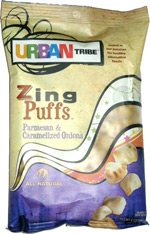 Taste test: These small snacks were various shades of off-white to beige in color and had the same exterior shape as pretzel nuggets.

However, they were actually nothing like pretzels, as they were much less dense, and portions of their interiors were hollow. While a few pieces looked like intact nuggets from the outside, most had gaping holes (from those hollow portions extending right into the walls) or were broken into partial nuggets. The puffs had a light cracker-like crunch and were nothing particularly great. Most of our tasters weren't very impressed, as the flavor was kind of weird. The taste wasn't quite awful, but it only sort of vaguely resembled parmesan and sweet onion. One of our snackers liked the taste a lot when she first tried these, but didn't like them much when she returned for seconds.

Smell test: Very weird. Some thought it was kind of a bad cheese smell, while others though it was some sort of sugary cereal but couldn't agree on which kind.

From the package: “What are Zing Puffs, you ask? They're a tasty new snack — derived from the careful blending of Zing (the imagingary sound your mouth makes when it bites into something flavorful) — and Puffs (that which is known for being delicate and light). Bring them together (like we do) and you have a deliciously satisfying snack unlike any you've ever tasted. All-natural Zing Puffs are bite-size pillows of wholesome brown rice, baked to a light, crispy crunch and infused with bold flavor combinations that'll make your mouth ... well ... Zing!”