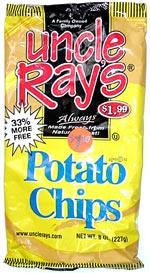 It's good that they're able to include lots of large, unbroken ones in a bag like this. They're average.

From the package: “Though I've called Detroit my home since 1942, I was born in Chattanooga, Tennessee. Each summer when I was a boy — from the age of 10 until I was 16 — my brother Bob and I would go back to Tennessee to spend six wonderful weeks with my grandparents.”

This snack was discovered by Jeremy at Family Dollar.