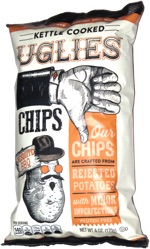 Taste test: These potato chips promised to be ugly by using potatoes that usually get rejected. When we took a first look inside the bag, they looked like pretty typical kettle-cooked chips, not noticeably ugly. There were folded-over pieces, and lots of smallest ones, but for the most part nothing out of the ordinary.

After shaking up the bag, I found one piece with an edge that was noticeably bright green. I ate that one first! The chips had a strong kettle-style crunch with a very mild mesquite barbecue taste, somewhat sweet too. It was not a standout flavor, but good. I looked for more unusual-looking chips and really couldn't find much. There was one chip with a darkish area, but I don’t think it would’ve raised an eyebrow in any other chip bag. So the chips were much less ugly than expected!

From the package: “Our chips are crafted from rejected potatoes with minor imperfections” ... “Reducing waste & saving you money” ... “40% of food produced in the US goes uneaten” ... “26% of produce gets rejected for cosmetic reasons” ... “Wasted food is the largest component in land fills. ”

This snack was discovered at Grocery Outlet. Review published .