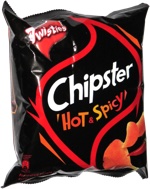 Taste test: This version of Twisties did away entirely with the familiar Crunchy Cheetos-like shape and corn material, as the "Chipster" sub-brand apparently means that they're just potato chips. The chips had gently curving shapes and a bright orange color, with some dark potato skin areas on the edges of some pieces, plus some bubbles embedded inside.

We crunched in to find a nice light crunch and crisp feel, with an initial taste that was fairly standard basic barbecue chip, but it quickly grew hotter from there, with increasing levels of heat as the aftertaste took effect. The heat was not super-intense, but it was pretty hot and lingered for quite a while. Good chips.

From the package: “Made in Malaysia” ... “Allergen Information: Contains wheat and soya. Manufactured on equipment that also processes products containing milk and shrimp.” ... “100% imported potatoes”

This snack was discovered by Andrew McIntosh in Malaysia. Review published .