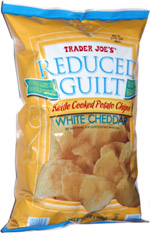 Taste test: These potato chips were a bit of an oddball, as they combined some special formula that reduces fat and calories with a white cheddar seasoning that is usually used on popcorn rather than potato chips.

Opinions of our tasters were mixed. Most tasters noticed that the crunch felt different than the usual kettle-cooked chips, as the crispness was good but there was a very dry feel to it. The taste wasn't bad, but it just wasn't particularly potatoey. Most tasters thought they were pretty good, but a few did detect a strange aftertaste that they did not like.

Smell test: Mostly smells like potato chips, but there is a slight bit of cheese.

From the package: “Slow kettle cooking and real white cheddar cheese give these chips their crispy crunch and irresistibly cheesy flavor — quite a winning combination. Making these chips the hands-down champs, though, is their abilty to blend this great taste profile with a radically reduced guilt profile. These chips have 33% less fat and 20% fewer calories than our regular potato chips.”

This snack was discovered by Keith and Melissa at Trader Joe's. Review published September 2008.