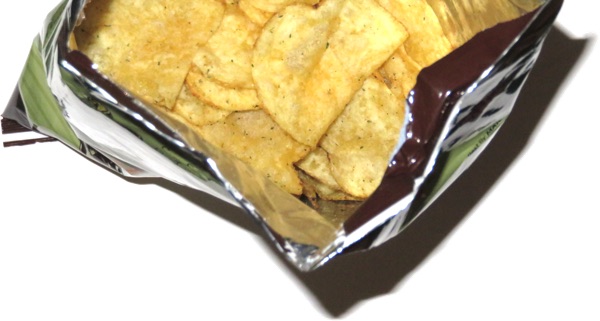 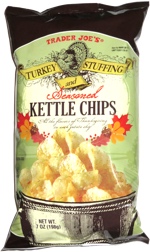 Taste test: When I bought these chips at Trader Joe's, the cashier asked if I had eaten them before (I hadn't) and told me that they were amazing. When I mentioned that I had tried three other kinds of turkey-flavored potato chips before (I didn't list them out for him, and actually there are four: Lay's, Boulder Canyon, Walkers and Vintage Maine Kitchen), he was surprised that there were any at all!

The potato chips had just minorly wiggly shapes, with a bright yellow color, many bubbles embedded inside, some skin on the edges and lots of green specks on the surfaces. I crunched in to find a strong crunch with top-notch crispness — a really nice texture. As for the taste, the mix of spices was quite flavorful. It was strongly like stuffing and gravy and a bit less like actual turkey than those other chips, but there were hints of turkey. It's far easier to open up a bag of these than to prepare a whole Thanksgiving dinner!

Smell test: Really does smell like turkey and gravy. Nice!

From the package: “All the flavors of Thanksgiving in each potato chip” ... “Turkey and Stuffing Seasoned what? Potato chips that taste like what? Have we absolutely lost our minds? Entirely possible. But if this is the end, what a way to go. Science fiction said that entire meals would one day be available in a single pill. We've one-upped sci-fi and delivered Thanksgiving dinner in the form of a potato chip.”

This snack was discovered by Jeremy at Trader Joe's. Review published November 2016.