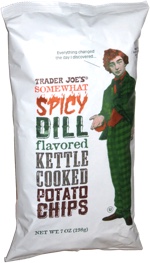 Taste test: These potato chips were generally smallish, with wiggly shapes and a bright yellow/orange color, plus a heavy smattering of bits of green dill.

We crunched in to find that the chips were very crunchy and also quite crisp, with lots of dill pickle flavor to start, followed by some nice heat. As "somewhat" promised, it wasn't an overwhelming heat, but this heat wasn't a slacker either — it did get fairly hot after eating a handful of chips. We shared these with some snackers enjoying beverages and brunch, and everyone who tried some was quite thrilled, in most cases returning to the bag for many more handfuls.

From the package: “Flavor-wise, these potato chips are in a pickle — a somewhat spicy, dill pickle, at that. What starts out as a bright, tangy, pickle-like brine flavor gives way to a warming sensation; and after a handful has been eaten, the just spicy enough taste begs for … another handful. Then, something to drink. We think most sandwiches would be better if accompanied by these somewhat spicy dill chips. We also think they're really good solo — with something to drink.”

This snack was discovered by Jeremy at Trader Joe's. Review published August 2016.