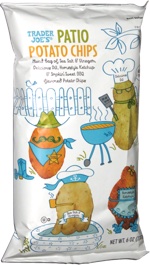 We crunched in to find a nice crunch and some contrasting sweet and savory flavors. The BBQ and ketchup ones seemed relatively muted, while the dill and vinegar had more kick. It was a nice mix of tastes, a fun take on potato chips.

Smell test: Vinegar was the most noticeable, but I could notice some savory stuff too.

From the package: “Mixed Bag of Sea Salt & Vinegar, Delicious Dill, Homestyle Ketchup & Smoking Sweet BBQ flavored Potato Chips” ... “A barbecue is always better when a cast of colorful characters is in attendance. We suggest bags of Patio Potato Chips — the crunchiest characters on the block. Dark russet potatoes are partnered with punchy flavors — BBQ, Dill, Sea Salt & Vinegar, or Ketchup — to keep the conversation captivating.” ... “Product of Canada”

This snack was discovered at Trader Joe's. Review published July 2019.