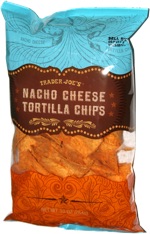 Taste test: These chips looked a lot like Nacho Cheese Doritos, with similar shapes and surface textures, but they weren't quite as bright of an orange color, as there appeared to be less cheese powder.

I crunched in to find that they were kind of like a Doritos Light — a very similar taste, but less intense, and similar texture, but less of a crisp feel. Good chips, a very tasty snack, but a step down from the intensity of Doritos.

From the package: “These are not your average nacho chips. Crispy, crunchy tortilla chips are made with quality ingredients like organic stone ground white and yellow corn and real cheddar cheese. These chips are generously seasoned with an array of zesty spices for a satisfying snack experience.”

This snack was discovered by Jeremy at Trader Joe's. Review published February 2017.