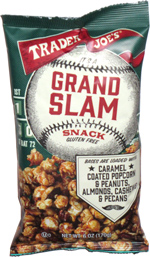 Taste test: We opened this bag to find that it was filled about halfway, with the top of what was filled graced with huge, round kernels of caramel-coated popcorn, with nuts stuck to some of the kernels.

We crunched in to find that the kernels were very soft and were generously coated with a deliciously sweet caramel. The placement of the nuts on the kernels was fairly random, with most kernels having none, some having several and others just one. Most of the kernels were individual, not clustered, but we did find a few stuck together as well, in some cases with nuts attached. When we tried a cluster of two with a pecan attached, it was really loaded with flavor. The other nuts were peanuts, almonds and cashews.

Overall, there were way fewer nuts than shown in the picture on the bag — this was mostly caramel corn. But it was really good caramel corn, and the occasional nut did add some nice variety.

Smell test: Mild caramel corn smell, but there was a hint of nuts too.

This snack was discovered by Jeremy at Trader Joe's. Review published May 2014.