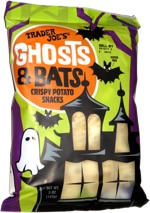 Taste test: These Halloween-themed potato crisps came in just the two shapes mentioned on the bag — bats and ghosts — with the same light beige color for both. The pieces were fairly big, and although the looked brittle, there were few broken pieces in the bag.

I crunched in to find a a nice crispy crunch but surprisingly bland potato flavor, especially at first. The potato flavor kicked in a bit after a delay, and it was nice, but don't count on these crisps for a huge potato flavor.

From the package: “There once was a house in a forest dark, where ghosts and bats — upon a lark ... ... happened on to potato crisps and commenced munching forthwith. No squeaks or moaning were ever heard, instead — a crunch, crunch, crunch. So absurd ... It was not long before of their favorite snacks the ghosts and bats began to smack! Spooky.”

This snack was discovered by Jeremy at Trader Joe's. Review published October 2016.