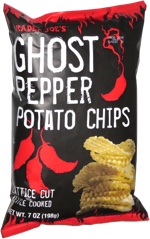 Taste test: These potato chips were the first ones from Trader Joe's that we've seen to sport lattice-cut shapes, but I didn't even notice that until I opened the bag, because it was the promise of a ghost pepper flavor that sparked my interest. We've seen an explosion of ghost pepper flavors lately, but we still haven't found any snacks that come close to matching the extreme heat of the actual pepper, which is very, very hot.

I opened the bag to find that the chips looked a lot different from the lattice-cut chips from Cape Cod and Herr's, as these were smaller and had narrower ripples. I crunched in to find a tasty zing of spices but a fairly mild heat, along with a very nice crispy crunch. I checked the ingredients and found that ghost peppers were just one of many spices in there, including some other peppers, plus garlic, onion, various sugars and more. The chips were quite tasty, and the heat did grow a bit in the aftertaste, but still, a very big disappointment as far as ghost peppers go.

From the package: “Lattice cut kettle cooked” ... “If spicy flavors bring you joy, more than any game or toy, then try these chips with loads of heat and crunch that simply can't be beat. We've used a chili called the ghost, providing heat which we can boast is hotter'n jalapeño or habanero. And so we issue you a dare-o to grab a bag and take a bite of chips packed full of ghostly fright.”

This snack was discovered by Jeremy at Trader Joe's. Review published October 2015.