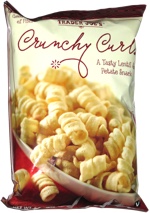 Taste test: These snacks were quite unusual in shape, as they were large spirals, far bigger than a rotini type of spiral. Most pieces had two to three revolutions of spiral, so they weren't all that long. They had a consistent light beige color.

I crunched in to find a good crunch and a nice flavor, sort of like lentils, though when I shared the bag around, some snackers thought it was similar to popcorn (despite the fact that it contained no corn). Pretty good!

Smell test: Slightly weird, but not bad, kind of like it.

From the package: “A Tasty Lentil & Potato Snack” ... “You've no doubt tasted snacks made with corn and snacks made with flour. But lentils? That's a new one, right?” ... “Speaking of servings, you get 31 curls in each 130 calorie serving.” ... “Ingredients: Lentil Flour, Potato Starch, Soybean Oil, Pre Gelatinized Potato Starch, Salt. Contain soy. May contain traces of wheat.”

This snack was discovered by Jeremy at Trader Joe's. Review published December 2016.