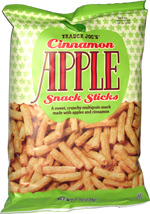 Taste test: These fry-like snacks were hollow and beige in color, measuring about 2 inches in length. Most of the pieces had a slight curvature. It looked like they were extruded with a hexagonal profile, but it took a careful look to even notice that, as they ended up looking very close to round.

We crunched in to find a nice crispness and light crunch, with a mild, sweet apple flavor and just the slightest bit of cinnamon — a nice taste. They were made from many different grains, as the ingredients included corn, rice, wheat, oats, barley and potato, and somehow that combination give them a very nice texture too. The grains and/or flavorings left lots of fine, dusty stuff on the fingertips, but other than that, these were great.

Smell test: Kind of like apple sauce, with a hint of cinnamon.

From the package: “A sweet, crunchy multigrain snack made with apples and cinnamon” ... “Our Cinnamon Apple Snack Sticks were an instant hit when we first tasted them.” ... “At 38 snack sticks per serving, you can go ahead and indulge!”

This snack was discovered by Jeremy at Trader Joe's. Review published May 2015.