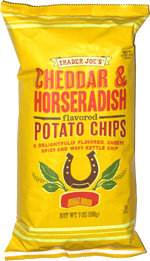 Taste test: These potato chips had wide, shallow ripples and somewhat wiggly shapes, with some folded-over chips, occasional areas of skin on the edges, and what appeared to be lots and lots of seasoning powder. The chips were kind of a light yellow, but they were heavily covered with a light orangish flavoring, for an overall color that closely matched the color of the bag.

We crunched in to find a very hard crunch and quite a bit of horseradish kick. On some bites, the cheddar preceded the horseradish, while on other ones the order was reversed, but regardless, the mix of cheddar, horseradish and potato was very good. The horseradish was pretty consistently strong. Our snackers were big fans of the crunch and the flavor. The general horseradish strength wasn't quite as high as that of the stronger chips in the bag of Herr's Horseradish & Cheddar (which varied widely in strength) but there was still plenty of kick to impress horseradish fans, and these chips found lots of fans.

This snack was discovered by Jeremy at Trader Joe's. Review published August 2013.