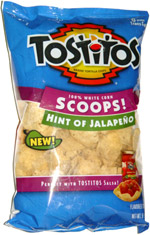 Taste test: These chips followed the same hexagonally folded concept as the original Tostitos Scoops, with a very light scattering of green and red seasoning visible on the scoop-optimized tortilla chips. The exact shape and depth of the scoops varied quite a bit from one chip to the next.

I crunched in without dipping initially to judge the "hint of jalapeño" seasoning, and I wasn't hugely impressed. There were definitely some salsa-like spices on there, and even a slight kick of heat, but it didn't specifically taste like jalapeño to me. I tried the chips with the preconceived notion that it's good to add spices to an ordinary tortilla chip, but that it's kind of pointless with Scoops, since they're intended to be dipped, so any salsa would overwhelm the chip's seasonings anyway. But after dipping in both salsa and sour cream, I was surprised to find that the "hint of jalapeño" seasoning was noticeable even when dipping, adding some nice additional flavor to an already tasty snack.

Smell test: Not super-strong, but there was definitely a small kick of jalapeño when I opened the back.

From the package: “Perfect with Tostitos Salsa!” ... “Made with all natural oil”

This snack was discovered by Jeremy at Market Basket. Review published March 2009.