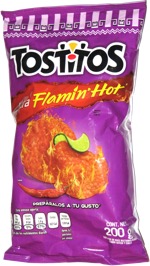 Taste test: When it comes to Flamin' Hot-branded stuff, the first thing that comes to mind is Cheetos, which after years of offering Flamin' Hot expanded the line to include Xxtra Flamin' Hot, available in their spiciest markets.

In this case, some Google searches reveal that the (not-Xtra) Flamin' Hot Tostitos product really does exist, but we somehow just haven't found it, so for the taste test, we're skipping straight to this Xtra Flamin' Hot one (which for some reason has one less X in its name than the corresponding Cheetos).

The chips were standard-size round Tostitos-size, with an intense red seasoning that was applied unevenly, with some dark spots on the tortilla chips visible through. I crunched in to find that they were really quite good, with a hot kick to start that got hotter in the aftertaste, with lots of great flavor beyond just the heat. Not killer hot, and again I can't compare against Flamin' Hot, but they were solidly hot and tasted great.

This snack was discovered by Jeremy at Food City. Review published March 2018.