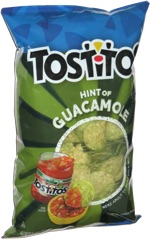 Taste test: Big fan of guacamole here, but unfortunately, guac is one of those things that's very tough to get right. By its nature, things made from avocado have a short shelf life, and making your own would be great if timing the ripeness of an avocado didn't prove so difficult. If Tostitos has found were a way to get that great taste onto a shelf-stable chip, count me in!

The round, midsize tortilla chips had uneven coatings of green stuff, plus some very unevenly applied black seasoning scattered about. The green did bring a nice visual clue to the inclusion of guac — enough that I'd actually expect more than a hint.

I crunched in to find a taste that was kind of ranch-like, while also being also mildly spicy. The spice grew into a middling heat and stayed around for an aftertaste. The totality of the seasonings was definitely more than a hint. It didn't taste much like guacamole, though maybe there was a hint of guac (which really was all that they promised) amid all that other stuff. But with so much more heat than your typical guac, it kind of defeated the purpose of this snack, which was to be able to taste guac. It was a good taste, but it was disappointing that, much like other chips that attempted to deliver the flavor of guacamole, this one also largely failed.

Smell test: Something there besides the salty corn, but really not quite guacamole.

From the package: “Good apart. Better together. Hint of Guacamole, meet tasty salsa.”

This snack was discovered by Jeremy at Stop & Shop. Review published October 2020.