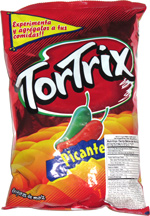 Taste test: This bag was full of surprises, as the picture on the front of the bag looked to me like rippled potato chips in the foreground and a pile of potatoes in the background, yet it contained nothing of the sort.

It was actually corn chips, similar to Fritos, except with less regular shapes shapes and enhanced by a picante flavor. The flavor was also surprise. The Picante name and the two hot peppers pictured had me expecting some serious heat, but the flavor and heat were quite mild. There was less salt than Fritos, so it brought out less of the corn flavor, and the pepper seasoning was pretty mild. The was a delayed hot aftertaste, but it wasn't much either.