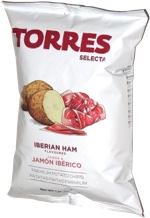 Taste test: These potato chips had somewhat wiggly shapes and a strong yellow color with some areas of browning, plus some skin on the edges.

We crunched in to find a very nice crisp, brittle feel for a really superior texture, but the taste wasn't quite what we had in mind. There was a great potato flavor with ample salt, but there wasn't really anything to taste in the way of Iberian ham — or non-Iberian ham, or any other meat, for that matter. So they were tasty chips with a great feel, but they didn't deliver the expected ham flavor.

Smell test: Kind of an oily potato smell, could not really notice any ham.

From the package: “Ingredients: Potatoes, sunflower oil, Iberian ham flavouring (2,66%) and salt.” ... “Made in Spain”

This snack was discovered by Jeremy at Curds & Co., Brookline, Massachusetts. Review published .