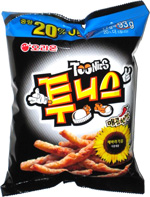 Taste test: The snacks were shaped kind of like Crunchy Cheetos, but they were generally less irregularly shaped than Cheetos, and had a light orange color with a very sparse distribution of red seasoning specks. The actual snacks looked quite a bit different than the ones pictured on the bag, as they were more orange and less shiny/greasy (indeed, not shiny or greasy at all).

I crunched in to find that they were crisp and crunchy with a nice tangy flavor that turned into a mild heat in the aftertaste. Unlike the BBQ flavor Toonies, which had a stranger flavor that was hard to place, this unusual flavor was quite pleasing. Very good.