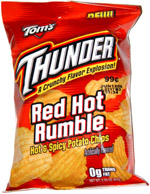 Taste test: This was a very impressive bag of spicy chips.

When I opened the bag, I saw a positively huge chip near the top, and it wasn't the only big one, as there were several size XL chips among the many chips in the bag. The thick-cut, wide-rippled chips had a good crunch and nice crispness, and they were heavily seasoned with a very tasty and impressively hot flavor. This wasn't one of those hot chips that was just hot; it tasted quite good even beyond the heat, as the hot peppers brought out the flavor of the potato and the other spices quite superbly. Great job by Tom's on this one.

From the package: “A Crunchy Flavor Explosion!” ... “Are you craving a big crunch and bold flavor? A snack that really satisfies? That's not just hungry ... it's Tom's hungry! Maybe lightning never strikes twice, but you'll seek my Thunder® Red Hot Rumble® again and again.”