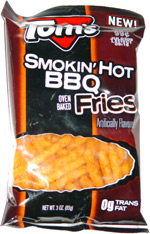 Taste test: These fries were fairly thick, with an orange overall color and some black specks of pepper on most of the pieces.

It was same basic concept as Andy Capp's fries, but they were actually far better than the always-popular Andy Capp's fries. First, they were packed with a really good flavor, with heat levels varying quite a bit from one fry to the next, but the ones were really, hot and spicy. (Some tasters who can't handle the heat were challenged by these.) Second, they had a better texture than Andy Capp's fries, as they were crunchier and stuck to the teeth just slightly (not massively as Andy Capp's do). Best part was the taste, which had some serious kick if you ate enough fries and stuck around for a hot aftertaste.

From the package: “My Smoking' Hot BBQ Fries are perfectly safe to much but all that robust flavor can set off a smoke detector now and again!”

This snack was contributed to Taquitos.net by the manufacturer. Review published July 2009.