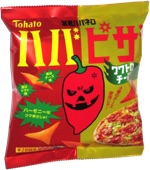 Taste test: The mean-looking habanero pepper on this bag got my attention — apparently the word "bokun" translates as tyrant — and I've never heard of a habanero pizza, so this snack definitely looked worth a try.

The smallish, hollow snacks had three-pointed shapes, kind of like right-angle isosceles triangles, except curving slightly inward on each side. They were two-tone in color, with light orange on one side and red on the other.

I crunched in to find a nice light, crisp crunch, with a tasty mix of potato, cheese, peppers, tomato and spices. There wasn't a lot of habanero heat, but there was some, and the combination of tastes was quite nice. I've had some foods where "tyrant" would be a good description of the habanero, but it didn't really apply here, as it was pretty mild. Still, very tasty!

From the package: “Product of Japan”