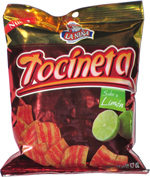 Taste test: This bag contained somewhat puffy snacks that loosely resembled bacon, complete with stripes. Actually, the stripes were the most bacon-like part of the appearance, as the pieces were quite a bit thicker than bacon and had a much less irregular appearance than pieces of freshly fried bacon do.

We crunched in to find an excellent crispness, light feel and light crunch, with a slight lime flavor mixed in with a bacon-like taste. The lime altered the bacon taste a bit, but I think even without the lime, it didn't capture a lot of the smokiness or greasiness of a real bacon flavor, though it still had a minor essence of bacon and tasted pretty good.