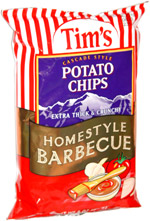 Taste test: These chips were cut thick, and many of the chips were folded over, which combined to make the typically good crunch of Tim's chips even greater.

The sizes of the chips varied quite a bit, and they had sort of a golden orange overall color. The chips were loaded quite heavily was a lot of nice barbecue flavor, which included a mix of quite a few different spices. For a barbecue flavor this intense, it was surprising that there wasn't any heat in there, but there wasn't. Still, our tasters liked these quite a lot.

From the package: “We've proven that a chip that crunches louder, tastes superior and satisfies better when it's made by people who take pride in a well made snack. Our products are still created one batch at a time.”

This snack was contributed to Taquitos.net by the manufacturer. Review published July 2008.