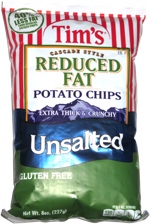 Taste test: These potato chips had a golden yellow color, with somewhat wiggly shapes and many folded-over pieces, plus many bubbles embedded inside and areas of skin on the edges.

We crunched in to find a serious, strong crunch with excellent crispness — a very nice texture, as we've come to expect from Tim's. However, on that first bite, the strong potato flavor that we've also associated with Tim's was largely absent. The lack of salt clearly affected the taste. As we ate more chips, a mild potato flavor — and a good one — gradually built up. But it was a whole level less intense than your typical potato chips and your typical Tim's. Not too bad, but if you're craving a salty potato chip and don't have a loaded salt shaker handy, you should probably get a salty potato chip, not these.