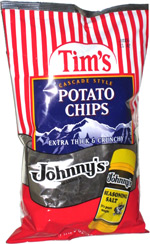 Taste test: These potato chips had the same highly crunchy texture as Tim's other potato chips, as they were cut thick and had a dark yellow color with some browning.

We crunched in to find very tasty chips with a mild seasoning, with the most common comment from our tasters being that they were very salty. The seasoning level varied a lot of from one chip to the next, but the ones where the seasoning was noticeable had just a bit of black pepper, while other chips had hardly any. The saltiness seemed to be more of a constant. Regardless of any of that, people really liked these and grabbed multiple handfuls while having some beers, so our tasters emptied the bag quickly.

This snack was discovered by Jeremy at Safeway, Alaska. Review published .