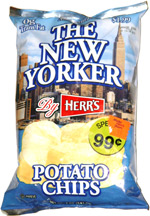 Taste test: These pale yellow, thinly cut chips had a bit of skin visible on some of the edges, and they were very crisp, with a good level of salt and good potato taste.

They were also a bit greasy. Indeed, the whole experience was pretty much the same as Herr's regular potato chips, so the distinction here was that they came in a bag showing part of the New York City skyline. The recipe was the standard recipe from Herr's, the largest potato chip maker in Pennsylvania, and Herr's didn't hide the fact that these chips were indeed made in Pennsylvania. So other than the fact that we bought them in New York, there was nothing New York about these chips. Herr's makes great chips, so we would still recommend them, but really this turned out to be just a novelty bag.

From the package: “Crisp and tasty, natural and delicious, The New Yorker By Herr's® is one little potato chip that shines brightly under the big city lights. Hailing from humble beginnings in Nottingham, Pennsylvania, Herr's® takes great pride in delivering a chip of exceptional great taste using the same time-honored tradition started by Jim Herr over 60 years ago.”