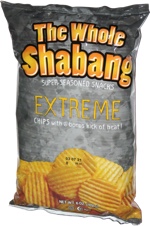 Taste test: It's been over five years since we ate Moon Lodge's The Whole Shabang Potato Chips, known in many jails for their deliciousness and difficult to find elsewhere. It seems that since then, the folks behind the chips have responded to the demand to have them available on the outside, as we've recently seen "Shabangs" on Amazon and eBay.

In this case, it's an "Extreme" version of that flavor, adding some heat, plus rippling the previously flat chips.

The chips had wide, fairly shallow ripples, with a nice orange glow throughout, some areas seasoned more heavily than others, and there were occasional bits of skin on the edges.

I crunched in to find a crisp, strong crunch that immediately — but only immediately — brought back memories of my first time experiencing the excellent flavor of the (non-Extreme) Whole Shabang, sweet, tangy, vinegary and spicy all at once, in a way that the Extreme Crunchies did not quite. Very shortly after that first bite, the heat arrived, adding some moderate burn to liven things up. The heat was good, adding another dimension to the Shabangs experience while sharing the stage with the original flavor, but it did interfere somewhat with simply enjoying the legendary Whole Shabang taste on its own.

As for the Extreme label, it made sense relative to the same flavor in non-Extreme, but among all hot chips, it didn't merit being called Extreme. Still, the level that they chose was probably a good thing, because too much heat may have distracted even more from the Shabangs flavor.

From the package: “Chips with a bonus kick of heat!” ... “Super-seasoned snacks” ... “Sometimes going a little over the top is a good thing. In the case of The Whole Shabang family of products, it's a very good thing. The Whole Shabang Potato Chips, with their one-of-a-kind taste experience, were an instant hit when they first appeared in our Moon Lodge line of munchies, and they've been snacking favorite ever since. Now that uniquely delicious medley of flavors has a brand all its own. Take your zest threshold to the next level — check out our full line of super-seasoned, taste-tastic items, each with its own ampted-up spin on the distinctly intense invention that is The Whole Shabang.” ... “Product of Canada”

This snack was discovered by Jeremy at Amazon.com. Review published .