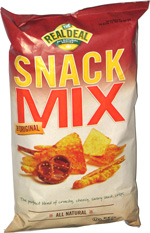 The two kinds of pretzels were about what you'd expect, with a fairly low level of salt, and they provided a contrast to the other zestier kinds. The crunchy cheese curls had a softer crunch than, say, Crunchy Cheetos, but their seasoning was surprisingly strong, with lots of intense cheese and probably some barbecue-type seasonings as well. Very tasty. The round tortilla chips were a bit of a surprise, because the picture on the bag showed triangular ones, but they were pretty good, with a good crispness and zesty seasoning. Most of those large tortilla chips were broken into multiple pieces. The corn chips were kind of like double-wide Fritos, but with less curve on most pieces, plus some BBQ seasoning; they tasted more like the seasoning than they did Fritos. Overall, it had a more buttery flavor than many other party mixes. Pretty good.

From the package: “The perfect blend of crunchy, cheesy, savory snack crisps” ... “Surprise Party: At a casual gathering on Cape Cod, Bill Corriere, Sr. and friends enjoy good food, great company and the ocean breeze. That was, until the snacks ran out. Reluctant to bring the party to an end, they gathered what crunchy munchies remain and poured it all into a big bowl. The magic of that evening lives on in The Real Deal™ Original Snack Mix.”