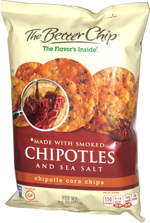 Taste test: These tortilla chips were round but generally bent in one way or another, with a dark orange color overall that included many large darker spots plus many small light spots.

I crunched in to find a soft crunch and low level of crispness, though the chips were fairly thick, with mostly a standard tortilla chips flavor initially. The chips promised that the flavor was inside, and that was borne out in eating them, as the chipotle pepper flavor hit next. It wasn't all that hot initially, but it did continue to grow hotter and hotter in the aftertaste, especially after eating several chips in a row. However, the high heat didn't translate into a whole lot of great taste, as the flavor — heat aside — was fairly bland.

From the package: “The Flavor's Inside™” ... “Heat Advisory: chipotle peppers in each chip” ... “We blend smokey chipotles directly into our chips to give them their spicy flavor and bold color.”