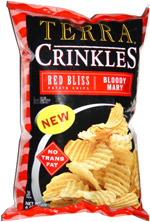 Taste test: These wide-rippled potato chips had some something reddish around their edges, but it wasn't Bloody Mary seasoning in the red, but rather the red skin of the Red Bliss potatoes.

When we crunched in, there was the good crunch and somewhat dry feel that we would expect from Terra Red Bliss Chips, but also none of the Bloody Mary seasoning that we would expect from a bag with the words "Bloody Mary" on it. The problem wasn't that there wasn't enough spicy tomato seasoning; there was just not any at all, as far as just about every taste was concerned. As potato chips, people liked them, but if you want an actual Bloody Mary chip, give Hot Potatoes (which had tomato but no heat), Pipers Crisps (both tomato and heat) or Intoxi-Tators (a little tomato and a little heat) a try.

Smell test: Nothing like a Bloody Mary. An average potato smell.

From the package: “Originally a South American crop that became popular in Europe, the red potato was cultivated to near perfection by North Americans in the mid 1900's, creating multiple varieties of the tasty red-skinned vegetable.”

This snack was discovered by Colleen. Review published .