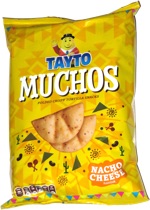 Taste test: These hollow, corn-based snacks were shaped kind of like tacos, but for some reason they also pressed them in two places so that they would be divided into three wedge-shaped thirds-of-tacos (kind of like how quesadilla are cut sometimes for serving).

The attempt to alter the shape was only successful for about half of the pieces, and the ones where it didn't hold were puffier and looked even more like tacos. The surfaces had various shades of orange and light yellow, plus some of the black spots typical of tortilla chips.

I crunched in to find a dull crunch and a very not-dull taste, with a nice explosion of spices. The taste was reasonably like a seasoned taco, much more than just the nacho cheese that was the official flavor name. Tasty and addictive!

From the package: “Tayto Muchos is a crispy, folded tortilla snack inspired by the Street kitchen of Mexico.” ... “Every bite is bursting with spices and seasonings for more flavor than a Mexican fiesta. Viva los Muchos!”