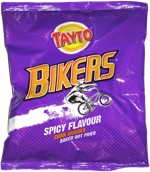 The corn-based snacks ranged in size and were generally about an inch and half in diameter and fairly thick, with a bright orange/yellow color. I crunched in to find a nice crunch, fairly solid but not hard, with average crispness and an intense flavor — tangy, spicy, slightly sweet and mildly hot. Pretty good. Not a good enough taste that I'd go out of my way to find again, but probably a fun gift for a snacking cyclist.

From the package: “Corn Snacks” ... “Baked not fried” ... “Spicy flavour corn snacks with sugar and sweetener” 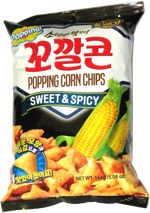