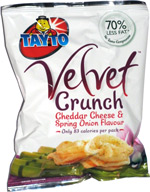 Taste test: These snacks had the wiggly texture of rice chips or Popchips, with somewhat more irregular shapes, as they deviated from being round.

The crisps were light beige, with some orangeish areas, plus some specks of green. The big change from other snacks we've tried was that these were made from cassava rather than potato, and they turned out to be quite good. They were crisp with a light crunch, and the cheddar cheese & spring onion flavor was really quite delicious. I don't know whether I could taste any of the cassava or just the added flavoring, but everything that I could taste was great!

From the package: “Only 83 calories per pack” ... “70 Less Fat No Taste Compromise” ... “Fancy something new? Fancy something exotic? This new snack is inspired by the Brazilian Cassava plant — the perfect low carbohydrate alternative to the potato. It's a new and delicate texture that sits lightly on the tongue, bursting with delicious Cheddar Cheese & Spring Onion flavour.”