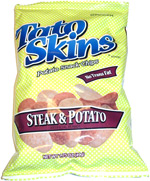 Taste test: These were the standard Tato Skins (potato crisps with the appearance of a potato skin) with a lot of flavor powder on them.

They did taste like steak when biting in, but it was more like the taste of steak juice than the actual meat. There was lot of flavor powder and what seemed to be a lot of salt. After a few of these, I had to take a swig of my beverage to cleanse the palate.

I don't understand why they called these "Steak & Potato" flavor, as the potato is implied by the nature of the Tato Skins. It's not like they added a potato to the potato snacks. They should have called them Tato Skins Potato Snack Chips Steak Flavor, but that probably doesn't have the same ring. And people don't usually take steak and potato and mix them together like the would with bacon and cheddar or sour cream and onion.

If you like Tato Skins and are eager to try a steak-flavored one, try these out. They get the taste right.

Smell test: After a few heavy whiffs you kind of get reminded of a freshly grilled steak.

From the package: “Tato Skins potato snack chips are great as a filling snack on the go or for a serious snack attack at home. Try warming Tato Skins in the oven or microwave, then top'em with all your favorites like cheese, salsa or guacamole for a snack your whole family will love. Tato Skins snack chips have been made with pride in Bluffton, Indiana for nearly twenty years.”

This snack was discovered by Keith at Network World vending machine, Southborough, Massachusetts. Review published May 2006.