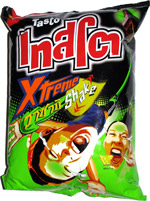 Taste test: When we opened this bag, we saw what looked like ordinary potato chips, but as wasabi fans, we were eager to find out what all of the "extreme wasabi shake" hype was about.

We crunched in and tasted quite a bit of wasabi flavoring. It gave a quick kick of wasabi but didn't really stay around for an extended burn, and our tasters liked it a lot. Then after going back to the bag for several more chips, we discovered that there was what a flavor packet floating around. It was tricky to get it open, but once we did, we poured the seasoning into the bag and shook it up quite a bit. With the additional seasoning, the flavor got even more intense, as the wasabi was sharper and had a bit more heat. It was quite tasty with or without the extra packet, but certainly a bit more interesting with it.

This snack was discovered by Jeremy at ebay. Review published January 2011.