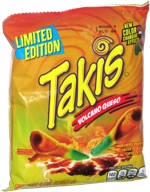 Taste test: This version of Takis promised a color-changing effect from the rolled tortilla chips, which were initially light orange in color, plus a habanero cheese flavor.

I crunched in to find the usual crisp, strong Takis crunch, with a nice nacho cheese taste, but only very briefly before the habanero heat took over. The heat wasn't overwhelming, but it was still impressively hot, with a great taste. The heat gradually grew and grew, turning into one of the tastiest afterburns that I've ever experienced. Really good!

As for the color-changing effect, normal eating of the Takis wouldn't really let you see it, but when I licked a Taki, it turned sort of greenish teal, unevenly (and nothing so dramatic as pictured on the bag) The more significant effect was on the tongue, which was definitely a change from my usual tongue color to a shocking teal.

One weird thing with this bag was that several of the pieces were not fully rolled up into the Takis shape. One of them was so far from fully rolled that I was able to learn something new about Takis. Evidently they're not made from triangular tortillas or even round ones — it's sort of an oval shape.