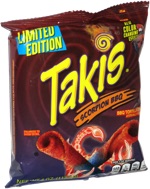 Taste test: This special version of Takis was released alongside Volcano Queso and promised a similar color-changing effect. Before changing colors, the chips had an orange color that was a bit darker than the Volcano Queso ones.

I crunched in to find a nice crunch and a fairly mild, very ordinary barbecue flavor, with some heat in the aftertaste, but really not a lot. Takis is known for bold flavors, but this ranks as maybe the mildest Takis flavor ever — don't fear this scorpion! It was tasty, but only very mildly hot. It did, as advertised, turn my tongue some crazy shades of blue!