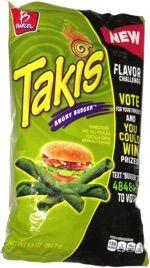 Taste test: So far, the Takis has offered a more limited flavor selection than Doritos, with only 11 versions reviewed by Taquitos.net prior to this one, vs. 128 kinds of Doritos, but it's clear that Takis is starting to step up its flavor game. This flavor promised to taste like a hamburger with pickles, and it was one of four in the first flavor contest (that we're aware of) held by Takis. (It wasn't clear from the bag what the consequences of this contest would be for the continued availability of the flavors.)

The rolled tortillas had the usual Takis shape and size, with lots of green seasoning, plus some yellow tortilla chip showing through in places. We crunched in to find a fairly light crunch as Takis go, with a flavor that could definitely pass for a burger with various condiments, heavy on the pickle. It was quite tasty. There was a bit of heat, but it was very mild, particularly as Takis heat goes. As for the "Angry" name, it was a bit confusing. Burger King has sold a product called the Angry Whopper, promising and delivering lots of hot peppers on the hamburger, but with the emphasis on pickles here, it wasn't clear what they were getting at.

Smell test: Nice mild pickle flavor, could pass for a burger with pickles.

From the package: “Hamburger and dill pickles tortilla chips artificially flavored” ... “Flavor challenge: Vote for your favorite and you could win prizes” ... “Made in Mexico”

This snack was discovered by Jeremy at Target. Review published August 2018.