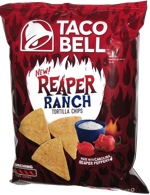 Taste test: Ever since we reviewed Paqui's One Chip Challenge Carolina Reaper Chips, we've known to fear the reaper, even if Blue Oyster Cult tells us not to, because they were far and away the hottest chips we've eaten. But we learned from eating Herr's Carolina Reaper Curls that mere mention of this pepper doesn't mean that it will actually be hot.

Among Taco Bell chips, the Fire flavor promised heat and delivered, and Diablo delivered even more, lending some credibility to the "epic hotness" mentioned on this bag.

The chips had the same 1/6-circle shapes as the other Taco Bell chips, with the beige surfaces covered somewhat sparsely with seasoning bits, most of them green.

I crunched in to find a light crunch and a nice mix of ranch and peppers to start, emphasis on ranch, but brining a nice new taste to the plate by mixing in the peppers. Heat arrived soon after, not super-hot, but hot. When I took a sip of juice, I did notice the hot peppers burning in my throat, a sensation I'd never experienced before. Out of my fear of the Reaper, I had both sour cream and guacamole ready on my plate, so I dipped some subsequent chips into one or the other to mix in some relief. The heat grew as I ate more, continuing to add strength after I finished eating, returning in full force after drinking juice, and lingering for quite a while — but it never came even close to the Paqui chips.

These weren't the hottest ever, nor close to it, but they were indeed hot and brought a brand-new taste with them, so Taco Bell should be commended for selling hot chips that are tasty and actually hot.

From the package: “Made with Carolina Reaper Peppers” ... “Scorching spice level” ... “This chip may look tame, but we took the epic hotness of the Carolina Reaper Pepper and paired it with the cooling zest of ranch for a flavor you can feel. A world with more Taco Bell® is just the kind of world we want to live in. That's why we made Taco Bell Tortilla Chips. It's the taste you crave, in chip form. (you're welcome)” ... “Product of Mexico”

This snack was discovered at Christmas Tree Shops. Review published . 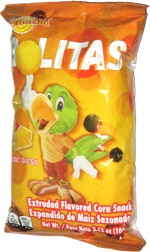