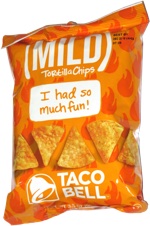 Taste test: Years ago — we're talking mid-1990s, in the pre-Taquitos.net era — Doritos sold some Taco Bell-flavored tortilla chips, which were good. In their infinite wisdom, they stopped doing this. Tables turned when Taco Bell started selling Doritos Locos Tacos in 2012, which in turn prompted Doritos flavors based on those tacos in 2013.

But now, Taco Bell has also broken free of Doritos, selling their own brand of flavored tortilla chips in grocery stores, with bag designs resembling the packets of Taco Bell hot sauce. (Their other flavor is Fire!)

I opened the bag to find that the chips were cut into one-sixth circle shapes, with somewhat wiggly surfaces and many bubbles embedded inside. Beyond the non-triangular shape, they still looked different from Doritos, as the chips lacked the dark spots that Doritos have on the surfaces. The overall color was a dull orange, with darker seasoning in some areas, applied unevenly. I crunched in to find a soft crunch, lacking the nice crispness of Doritos, with a spicy flavor that had a moderate heat, well in line with the "Mild" label, but probably more than you might expect if you think "Mild" means no heat. The taste didn't remind me that much of Taco Bell food, nor their Mild sauce, but they were pretty good chips.

From the package: “I had so much fun!” ... “I'm not the type to brag, but I'm perfectly seasoned with a little kick and a lot of flavor that makes the best crispy crunchy bite. I'm great for parties, on lunch dates or when you're craving a midnight snack.” ... “Packed exclusively for Taco Bell Corp., Irvine, CA 92618” ... “Product of Mexico”

This snack was discovered by Jeremy at 7-Eleven. Review published May 2018.