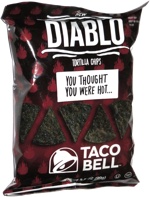 Taste test: Following up on the Mild and Fire flavors, designed to mimic both the taste and look of the corresponding Taco Bell hot sauce packets, this one took on their Diablo sauce, which I know from is experience is significantly hotter than the Fire sauce.

The chips were depicted on the bag as being very dark in color, and indeed they were just about black, with a smattering of orange seasoning lightening things up a bit. They had the same one-sixth circle shapes as the other two flavors, but they were so dark that they looked entirely different.

I crunched in to find that they unfortunately had the same crunch as the other flavors, soft and not crisp, far inferior to Doritos. Diablo definitely packed more heat than the Mild and Fire flavors, with a kick of heat to start, growing gradually from there and hanging around for a lingering aftertaste. It was tasty, with both hot peppers and a good amount of lime, but the strong heat didn't quite live up to the even greater strength of the Diablo sauce packets.

From the package: “You thought you were hot ...” ... “Introducing Taco Bell's new Diablo tortilla chips. I start with a crunch followed by a hint of lime, a kick of hot peppers, and a heat that deserves its own warning label. Think you can handle my flavorful Inferno?” ... “Product of Mexico”

This snack was discovered at 7-Eleven. Review published .